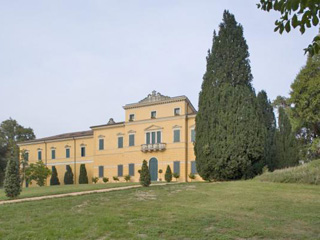 In Montegalda the Villa Fogazzaro-Roi now Colbachini (in Piccolo Mondo Moderno - The Man of the World, the villa is the residence of Don Giuseppe Flores, Piero Maironi's confessor):

[…] yellow-tinged clouds […] shone upon the damp steps of the villa, where Don Giuseppe was standing with a sad smile upon his face, and calling Maironi's attention to the picture presented by the plain, that faded away on one side towards the bluish, cone-shaped Euganeian Hills, on the other towards the thin wall of the Berici; and he was also telling him of the garden he had planned, designed and created upon this uncultivated plain and this wild hillside [...] 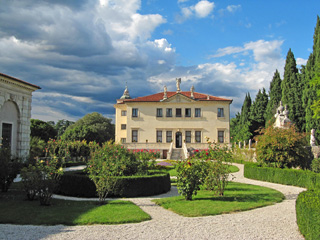 That fine pile with its many openings and its diadem of statues, light streaming from all its windows, rose white, above the two terraces crowded with guests [...]

It was indeed magnificent in the moonlight, this white marble terrace, jutting out from the first floor of the villa with its flight of broad steps leading down into the garden, its balustrade which the creeping roses had taken by storm and hidden beneath a tangled glory of dense foliage and great flesh-coloured eyes, long branches swaying in the vagrant breezes of the night.

The roses in "Villa Diedo":

Only the roses, clinging to the balustrade of the terrace on the west, quivered and moved, as if their long domesticity had communicated to them the sense of human enjoyment.

In Piccolo mondo moderno, the voice of the Sanctuary of Monte Berico announces its presence on the first night of the lunar eclipse:

[…] as the great, solemn voice of midnight sounded high up on the hill-side, where the Sanctuary showed white against the clear sky. The sudden tolling of the great bells […]

In Piccolo mondo moderno, Fogazzaro describes the loggias of the Basilica Palladiana in Vicenza:

[…] he entered the deserted Piazza Maggiore opposite the spectral magnificence of the great, black loggias with their staring eyes, with which a glorious master of olden days has surrounded the decaying and blind creation of a still more ancient colleague […] 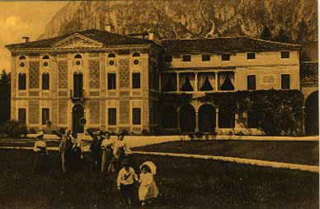 In Seghe di Velo d'Astico we find the Villa Valmarana Ciscato, renamed by Fogazzaro as the Villa Carrè in the novel Daniele Cortis:

The little chapel in the Villa Carrè hidden away in a corner of the garden between the railings and a group of firs, had apparently never ceased during the night of the 29th June from tinkling its bells.

Her little room was like sweet music – too sweet! The scent of the roses was too luxurious, their exquisite beauty was too delicate. She suffered there and her mind lost all its vigour; one ought to be happy to dwell in such a nest, and not to have thoughts in one's mind, such as she had, which accorded ill with the beautiful surroundings. Elena looked for a minute out of the window, through the leaves of the roses blown about by the wind. The tops of the mountains were red; a bluish shadow covered the fields [...] 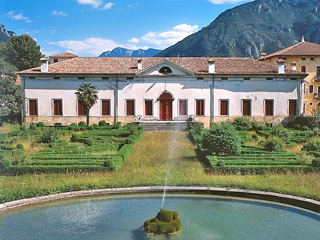 In Velo d'Astico, which Fogazzaro renamed Villascura in the novel Daniele Cortis, and indicated as such on the road signs, there stands Villa Velo, which is Villa Cortis in the novel, the home of the main character and evocatively described in the following excerpt:

Sky and mountain, all was black, from the Passo Grande, which carries on its lowest ledge the Villa Cortis, with its woods and fields, away to Monte Barco, and to the high, narrow gully, whence issues the Rovese torrent. At the top of the steps, against the whitish background of the house, a lighted door shone in the darkness. […] on his right, rising above him, were the branches of the dense wood which grows over the mountain and valley, and which covers peaks and ridges, streams and pools , with the terrors of its black shadows. The wonderful fountain in the garden made its voice heard, though it was invisible in the night.

Here is the description of Villa Cortis in the book of the same name:

An enormous lamp, placed upon a table, was burning in front of the door, and illuminated the hall from its pavement to its huge black beams, throwing into relief the four doors in the walls, the disorder of papers and books, heaped up anyhow on the table, and on the sofas and chairs, and the two stuffed eagles, with outspread wings, in the corners facing the entrance.

Another excerpt from the famous novel Daniele Cortis:

[…] a stream covered with water-lilies trickled; the grass grew thickly over the path, and overhead the branches of the acacias on either side mingled, and cast a golden green shadow. Thence she mounted to a quiet opening in the hills, and there, among the trees on a grassy plateau, stood a column of ancient marble, brought from the baths of Caracalla to this other solitude, and bearing on its base two clasped hands carved in relief, and the following words: 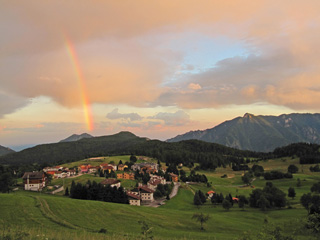 Fancy the monstrous, horned, great-grandfather of all elephants, barring the broad way, his head bowed, his flat skull stretched forward […] his swelling flanks fading into the shadow beyond. Thus, between two narrow valleys, hewn out by the strokes of a god, does the spur that bears Vena di Fonte Alta stretch forward from the base of Picco Astore, its twin horns facing the great stone quarry of Villascura. […] Every object bears the impress of a sentiment, of a personal idea of beauty, which moves us to sigh with a sad, indefinable, sense of the absence of someone who must once have passed this way, and whom we should have loved.

Here is his description of Villa La Montanina in the novel Leila:

[…] it is so like one of those peasant women who come wearily down from the steeps of Priafoà, and pause to rest awhile upon the bundle of wood they have gathered in the forests.

Or according to the comment of a guest in the novel:

A big house with a family of children.

The mountains in Leila:

[…] the delicately arched brow of Torraro divided the space that yawned between Priaforà and Caviogio, whose black and might outlines swept downwards majestically, like the flowing robes of giant monarchs. His thirsting soul found comfort in the brooding peace of the scene.