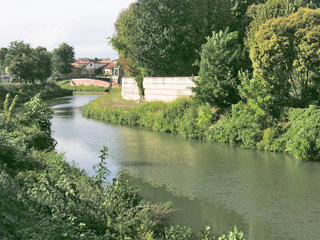 Long stretches of the Cammino Fogazzaro-Roi follow the course of the River Bacchiglione and other rivers that flow from the foothills of the Alps to the northern Vicenza plains.

From Montegalda to Vicenza, the route follows the slow, deep-running course of the Bacchiglione across the flat countryside. To the north of Vicenza the river becomes more shallow, its riverbed more gravelly, and its currents picking up pace though it is still well-contained behind embankments. The source of the river is near Dueville where a series of resurgence streams merge to form the Bacchiglioncello, as it is known at this point, and the river then travels 119 km, flowing into the Adriatic Sea near Chioggia, where it shares its bed with the River Brenta.

Near the springs, just downstream from its source, other tributaries from the Alpine foothills join the Bacchiglione. The Timonchio is the largest of these and originates in the valleys that lie between Mount Summano and Mount Novegno. As it descends it receives the River Leogra, which carries large volumes of water in times of heavy rain and whose source is in the Val Leogra at the foot of Monte Pasubio and the pass at Pian delle Fugazze. The River Orolo, which collects water from the eastern slopes of the Lessini mountains between Schio and Isola Vicentina, is also known for its peak discharges and joins the Bacchiglione just north of Vicenza. The same is true of the River Igna which descends from the hills of Bregonze at the mouth of the River Astico valley, below the southern edge of the Asiago Highland Plateau. 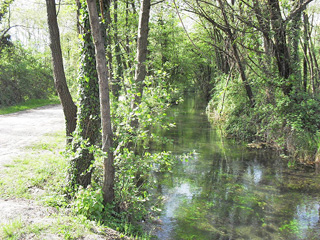 While the spring waters ensure that the Bacchiglione has a constant and relatively abundant volume of water, its tributaries provide little water for most of the year except during periods of heavy rainfall raising its discharge which can sometimes lead to severe flooding. This was the recent case in November 2010 and the effects of the flood can still be seen. Other major flooding in the past 130 years occurred in September 1882, May 1905, October 1907, May 1926 and November 1966.

Other tributaries feed the Bacchiglione along the section of the route between Montegalda and Vicenza. Just outside the city, at the beginning of the Riviera Berica, there is the confluence with the Retrone, another resurgence river which runs through the city and whose source is to the west between Sovizzo and Creazzo, itself the result of the confluence of two rivers, the Onte and the Valdiezza.

Near Longare the Bacchiglione meets the Tésina, a resurgence river whose source is upstream of Sandrigo. This receives the waters of two rivers: the Làverda, from the southern slopes of the Asiago Highland Plateau between Lugo Vicentino and Breganze, and the Astico, which is its main tributary and whose source is in the Trentino region. 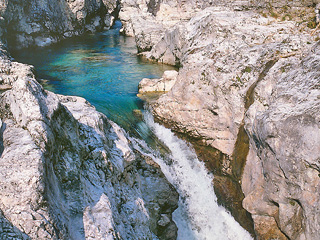 Its catchment area extends across the foothills between Monte Pasubio and the Asiago Highland Plateau, including the Val Posina and Val d'Assa which plunges deep into the western section of the plateau.
Between Piovene Rocchette and Pedescala, passing through Velo d'Astico and Arsiero, the Cammino follows the River Astico before leaving the valley to climb up on the right side towards Tonezza, final destination of the route.

The River Bacchiglione flows wide and deep just downstream of Vicenza and this, coupled with abundant reserves of water, meant that the river was an important waterway from the Middle Ages onwards, transporting goods and people to the major coastal ports and mainland cities, such as Padua. The river also provided energy for the development of local industry and artisan workshops.

There were many mills along the river, (some of them were floating mills) which made navigation difficult, especially where major industries existed, as water would be diverted to operate the mills. The creation of a series of locks enabled water levels to be raised or lowered and helped overcome this problem.
One of these locks was built in Debba in 1583 and it can still be seen today. Commonly known in Italian as a “vaso”, it was ellipsoid in shape, 18.15m long and 5.02m wide, with a rise of 5.02m and could carry small to medium-sized vessels. It was still operating in the early twentieth century and in 1905 an expansion project was drawn up to enable larger vessels to pass through, but it was never implemented as river traffic was beginning to dwindle. The barges used were called burchi and they were towed by the alzana, a wooden mast on the vessel attached to two tow-ropes (reste) pulled by draft animals such as horses or oxen along the tow-paths, known as "restare".

A larger lock was built in 1870 in Perarolo di Colzè and can still be seen today along the route of the Cammino.

Over the centuries, river navigation was of crucial economic importance and was often the cause of fierce dispute between cities and peoples along the river for control and use of the waterways. Such was the case in 1143, when a dam was constructed to divert the course of the River Bacchiglione to the Bisatto canal, during the war between Vicenza and Padua.
The Vicentini dug, or rather widened, this canal, so as to drain its waters into the Riviera near Este, thereby leaving the Paduans without any water supplies and no means of powering their mills or navigation. The Vicentini repeatedly used this technique in their struggles with the city of Padua, and armed clashes took place near Longare, presumably just downstream from the town near the start of the Bisatto canal.

As the river flows across the plains, the hedges and trees along its banks provide the ideal habitat for a wide range of animal species, particularly birds. During breeding season, the most common of these are the Moorhen, the Mallard, the Common Kingfisher, the Turtle-dove, the Cuckoo, the White wagtail, the Grey wagtail, the Nightingale, the Blackbird, Cetti's warbler, the Blackcap, the Great tit, the Common chaffinch, the European serin, the European greenfinch, the Golden oriole, and the Magpie. Some of these can be seen all year round while other migratory species only appear during the breeding season or in winter. Recent seasons have seen species who winter in these environments, such as the Wren, the Dunnock and the Robin.

Compared to the comparative environmental monotony of the surrounding countryside, the river, its banks and wetland areas, are a rich source of biodiversity and a vital environmental asset.