Fogazzaro was keenly aware of the landscape surrounding him and his novels enable us to explore the local treasures in this area which require proper management and conservation. In Piccolo mondo moderno (The Man of the World), Fogazzaro himself, through the character of Carlino Dessalle, demonstrates a very modern approach when he passes severe judgement on the inability of heritage bodies tasked with the conservation of a noteworthy artistic site, namely the Abbey of Praglia:

[…] the Government with its Council of Fine Arts, with its list of national monuments, with its useless and bothering conservative commissions, with its cataracts of ministerial rhetoric, left such a jewel to rot and die […] 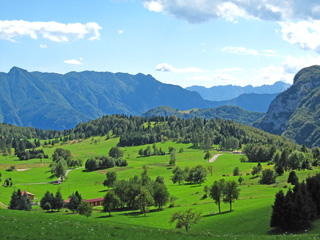 There are a host of good reasons to walk the Cammino Fogazzaro-Roi, seeking out the places in the area as described by Fogazzaro in the novels Daniele Cortis, Piccolo mondo moderno and Leila; first and foremost so as not to forget the beauty of our surroundings, but rather to revel in it as we savour the artist's vision of nature and the scenes he depicts in his works.

Fogazzaro appreciated walking and it was how he measured out the space in his world, its rhythm accompanying some of the most compelling scenes in his novels. Today that same activity has been endorsed as a way of expressing freedom by David Le Breton, one of the leading experts on the anthropology of the body:

Finding relief when we walk along the streets, or trails, or in the woods does not exempt us from taking responsibility for the chaos that exists in the world, but it lets us catch our breath, sharpen our senses and re-awaken our curiosity. In a world where humans spend most of their time sitting down, either in a car, or on the underground, or in the office, enslaved by our computers and mobile phones, walking is becoming a noble form of resistance, or rebellion even, against speed, productivity, and efficiency: it is a cry for freedom.

The Cammino Fogazzaro lures us away from the frenetic pace of everyday life, it encourages us to rediscover our own natural rhythms in complete freedom, to get back in touch with our roots and commune with nature and to culturally enrich ourselves as we trace the literary connections, admire the artistic beauty of the villas and monuments and bask in the glorious scenery around us. It is an emotional experience, building an almost symbiotic relationship with our environment. The philosopher Fréderic Gros has also written on this subject:

[…] to try to give some meaning back to our body in an age when its has been decreed useless, as we attempt to rid ourselves of every kind of effort. This is the paradox since it is also true that, today more than ever before, there exists the myth of physical fitness. And this re-engagement is connected to one of the most fundamental aspects of walking: slowness. Step by step, the landscape ceases to be a mere display for our eyes but it takes root in our body, it is transcribed within us.