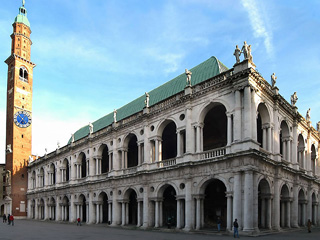 Descending from Monte Berico towards the centre of the city, the Cammino Fogazzaro Roi leads us towards Piazza dei Signori, adorned with many splendid masterpieces including the iconic landmark, the Basilica Palladiana.

Around 1450, the city felt it necessary to build a new public palazzo with a large room to host assemblies of the Consiglio dei Cinquecento (the Council of the Five Hundred, the city's governing body). Thirty years later a series of loggias were constructed around the building to provide additional space and shelter for the merchants who met in the main square. These were completed in 1494 to a design by Formenton, but approximately two years later the loggias on the west side collapsed, owing to inadequate foundations. In 1549, after lengthy consultations, Palladio's proposal was chosen and work began.

The Palladian loggias are a repetition of the same architectural element: the serliana window. A central arch is flanked by two rectangular openings framed by paired columns. Each bay appears to be the same size but they are in fact different; the architect cleverly adjusted the bay sizes to fit the existing structure, which was trapezoidal in shape, especially at the corners of the building, and the vertical lines of the columns continue upwards and through to the statues atop the upper balustrade.

In Piccolo mondo moderno (The Man of the World), Fogazzaro describes the loggias thus:

[…] he entered the deserted Piazza Maggiore opposite the spectral magnificence of the great, black loggias with their staring eyes, with which a glorious master of olden days has surrounded the decaying and blind creation of a still more ancient colleague […] 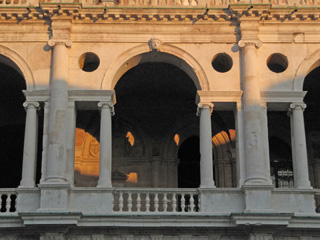 Other details on the upper loggia evince Palladio's ingenuity. The columns are not aligned with the windows in the great hall, allowing light to pour in. If you observe the outer wall of the older building on the upper floor, you will notice that it seems to lean inwards: this can be explained by studying the building techniques. As the wall goes up it has to support less weight and requires less building material. However, saving on material in this way can give the idea of instability; so Palladio designed his loggias to stand perpendicular to the piazza but not aligned with the internal walls. 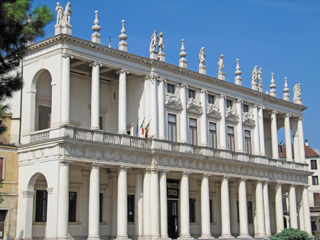 Heading away from Piazza dei Signori, but before reaching corso Fogazzaro, a short detour from the Cammino Fogazzaro Roi, down corso Palladio, brings us to Piazza Matteotti. Here we can admire Palazzo Chiericati, a Palladian masterpiece and home of the Pinacoteca Civica (City Art Gallery) which received a precious bequest in 2009 from the Marquess Giuseppe Roi, Fogazzaro's great-grandson.

It may not be the most beautiful sixteenth-century palazzo, but it is certainly one of Palladio's most daring and superb creations. Begun in 1550, only the southern wing, from the basement to the roof, was initially completed. In a 1580 map of Vicenza, the Pianta Angelica, this portion of Palazzo Chiericati is shown hemmed in by the little houses huddled around it, although it had, by then, been made habitable with some opulently decorated rooms. Work resumed towards the end of the seventeenth century under the supervision of Borrella, who took a certain amount of licence, such as the addition of statues and vases, but was essentially faithful to Palladio's original design. After standing in disuse for a century the city council bought the palazzo in 1839 from the aristocratic Chiericati family, intending to use it to house the civic art collections. It was renovated by the architects Berti and Miglioranza and opened as a museum in 1855. The museum collections are still undergoing radical refurbishment which is expected to conclude between the end of 2012 and early 2013.

The location was of crucial importance in Palladio's design: the plot comprised both a clearing down towards the banks of the river Bacchiglione, and was a route into the noble part of the city with its corso and piazzas. This was Vicenza's front door, where the city officially welcomed its illustrious visitors with pomp and circumstance and so the palazzo had a dual role to play: it would be a place for people to congregate and also act as the propylea, or monumental gateway, to Via Maggiore, known today as corso Palladio, the city's decumanus. Dramatic chiaroscuro effect on the façade is created by flush and recessed walls and groups of half columns, bridging the transition from the shaded to the lighter areas, and preparing us for the rounded end arch which encloses the portico. The building plan is exquisitely simple, reminiscent of the villas where spaces flow seamlessly into one another with mathematical precision and perfect timing, and where the orchestrated play of solid and void on one façade is echoed in the one opposite. This gives rise to another distinctive feature of Palladian buildings: an imposing outer façade, indicating the family's standing, and a more subdued and intimate inner façade, as in the villa, which is reserved for the family.

For a comprehensive description of the Palazzo's interior and its collections please consult publications and catalogues by the Fondazione Roi, founded by Antonio Fogazzaro's great-grandson to develop and promote museum culture. 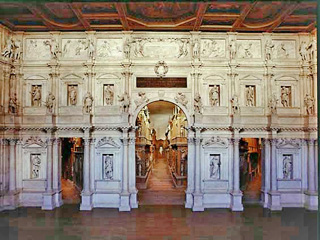 A short distance from Palazzo Chiericati, the Porta dell'Armamentario gateway leads into the courtyard of the Palazzo del Territorio, now a picturesque garden replete with sculptures. Worthy of note is the Doric loggetta, the palazzo's plain façade, which was rebuilt after air raid damage, and the façade of the Accademia Olimpica which adjoins the small apse of the stage of the Teatro Olimpico (Olympic Theatre).
The Odeo Olimpico, or music room, is the assembly room of the Accademia Olimpica, of which Antonio Fogazzaro was an eminent member and chairman. It was
built by Vincenzo Scamozzi and the frescoes are attributed to Franceso Maffei. The entrance to the theatre is Via the vestibule preceding the Odeo, known as the Antiodeo, and displayed on the walls are epigraphs commemorating some of the most prestigious members of the Academy, from Palladio to Trissino and Fogazzaro himself.
The Olympic Theatre, inspired by the ancient Roman theatres described in Vitruvius' writings, was commissioned by the Academy in 1580 and Palladio began working on its design but died the same year; his son Silla continued his father's work until Scamozzi took over in 1585.

Walking back up corso Palladio is the crossroads with Corso Fogazzaro, formerly known as contrà Carmini, and at number 111 can be seen the house where Fogazzaro was born.