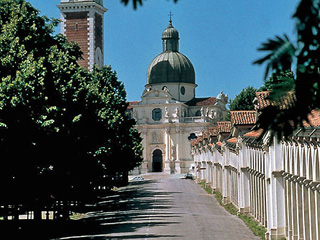 The road leading up through Via San Bastian, where the Villa di S. Bastian, one of Fogazzaro's residences, was destroyed by air raids in 1943, brings you to Viale D'Azeglio and then Viale X Giugno, where you can admire the Arcades of Monte Berico. Built in 1746 to a particularly simple design by Muttoni, the series of arches leading up to the Basilica della "Madonna da Monte" (The Sanctuary) display direct references the Rosary: 150 Hail Marys and the 15 Mysteries of the life of the Holy Virgin. Each chapel is dedicated to a Mystery in the life of the Virgin Mary, the apparition of the Blessed Virgin, and the Rosary and were decorated with frescoes between 1899 and 1900 by Bressanin and De Stafini. Drawing inspiration from Dotti's example in Bologna, the arcades are noteworthy for their severity and simplicity of design lacking any noticeable Baroque influence.

In Piccolo mondo moderno (The Man of the World), the voice of the Sanctuary of Monte Berico announces its presence on the first night of the lunar eclipse:

[…] as the great, solemn voice of midnight sounded high up on the hill-side, where the Sanctuary showed white against the clear sky. The sudden tolling of the great bells did not startle her but penetrated deep into her heart […]