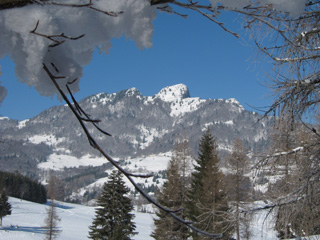 Following the signs for Arsiero, the route continues on towards Tonezza del Cimone, renamed "Vena di Fonte Alta" in Piccolo mondo moderno (The Man of the World) and described movingly by Fogazzaro:

Towering above the abyss that encircles them, the pine forests and beech groves of Vena wave against a background of sky, spotted here and there with pale emerald, where the fields press them asunder and overflow, and dotted with red and white where small houses are huddled together in groups. He who contemplates them from the top of the sloping and soaring Picco Astore, or of the lofty, cloud-capped mountains of Val di Rovese and of Val di Posina, may not realize their delicate and exquisite poetry.
But the wayfarer who threads their winding depths asks himself if, when the world was young, this was not the scene of the short loves of sad spirits of the hills and of gay spirits of the air; if the earth, in obedience to their varying moods, did not transform itself around them again and again, now forming shady marriage-beds [...]

The village is described thus:

[…] there stands a small hotel not built by the spirits either of the mountains or of the air. The lower floor is nothing more than a rustic tavern, where, on Sundays, the wine is wont to ferment and overflow in song and rioting […] the all-pervading odour of pine-wood […] the creaking wooden stairs, the rooms above with their floors of deal […] a homely interior in which one is glad to feel oneself alive [...]

The Cammino Fogazzaro Roi ends near Villa Fogazzaro Roi, where Fogazzaro's daughter, Gina (the Marquess Giuseppe “Boso” Roi's grandmother) stayed. In the novel the villa is called Villino dei Faggi. Nearby is the start of the Sentiero Fogazzariano, opened in the summer of 2005 by Tonezza del Cimone Town Council.

And so concludes our itinerary. We hope that this literary trail, and its connections with Antonio Fogazzaro's characters and the places he loved, will bring the area alive and give you insight a new perspective on the extraordinary scenery through which it passes.