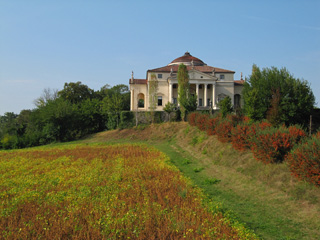 Leaving Montegalda and heading towards Vicenza, just outside the city lies the most famous and original of all Palladio's villas, which went unmentioned in Fogazzaro's novels: it is the Villa Almerico Capra Valmarana, otherwise known as "La Rotonda", an iconic landmark. This jewel is worthy of note, both due to its proximity to Villa Valmarana ai Nani, ("Villa Diedo" in Piccolo mondo moderno - The Man of the World), and because it clearly demonstrates the affinity between Fogazzaro and Palladio's idea of what it meant to sojourn in a villa.

Older historical documents dated this villa between 1550 and 1553, placing it within Palladio's early period and which explains that sense of primitive beauty which emanates from it; recent studies, however, have shown that it was built towards the 1570s. La Rotonda is not the first villa-temple of the celebrated architect but it is the only one to have its four façades facing the four compass points, surrounded as it is by gentle hills “giving it the appearance of a vast theatre”.

The villa was commissioned by the wealthy cleric Paolo Almerico when he retired from his career in Rome. After Palladio's death, in 1580, alterations were carried out by Vincenzo Scamozzi, while in the eighteenth century Francesco Muttoni turned the upper floors, which Palladio had designed as a belvedere loggia, into residential quarters, and which had been used as a granary. When Goethe visited the Rotonda (1786) he praised Palladio for having converted the Greek temple into a residence for mortals. 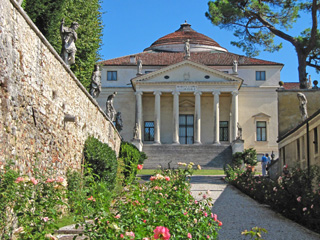 The entrance had been designed to face the river where the villa dominates the landscape and the abandoned terreplein is, in fact, evidence of the original patron's intentions. Entrance is usually from Via della Rotonda and this too is charming in its own way. The building is best seen, or rather absorbed, from the telescopic-like view provided by the two high walls, crowned with statues, which end abruptly, allowing the villa to stand out over the green lawn stretching out before it with its portico projecting onto the surrounding space.

The plan is based on three concentric circles: the first embraces the four porticoes, the second encompasses the external walls, which face the four compass points, and the third produces the central hall, which gives the building its name. The splendid staircases are flanked by massive abutments, and lead up to graceful, hexastyle ionic porticoes which are connected to the inner cube of the building by two beautiful arches, letting in light and softening the whole which is crowned by the pediment and statues by G. B. Albanese. Each of the four doors opens onto a small passage which leads into the central Rotonda: the passing of daylight hours could be seen through the central opening (or oculus) in the ceiling, similar to the one in the Pantheon in Rome, while the ever-changing seasons could be contemplated beyond the porticoes. The dome is decorated with frescoes by A. Maganza and stuccoes by L. Rubini. The oculus was closed up to accommodate decorative work rendering obsolete the perforated stone drain in the centre of the floor, or mascherone, in the shape of a laughing faun's face, which served as an impluvium. 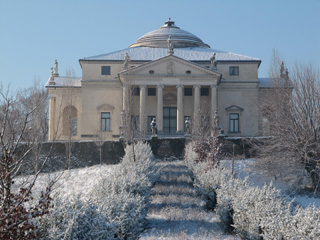 The ground floor is of particular interest as it is here that we get a real sense of Palladian architecture, which perfectly blends functional requirements with an exquisite sense of beauty. Daylight comes from the mascherone on the floor of the piano nobile in the rotunda hall, illuminating a square central space and then spreading upwards through rudimentary serliana windows into the circular spaces, creating spectacular effects on the walls.

The garden is mainly meadow and woods, as a sixteenth-century villa would require it to be, and the statues along the driveway are attributed to O. Marinali. The barchesse, or outhouses, are detached from the main residential building, with splendid arcades in rusticated ashlar built by V. Scamozzi, and overlook the open countryside all the way up to Monte Berico. The baroque chapel is by the architect G. Albanese, and features sculptural decoration from the studio of O. Marinali and the coat of arms displaying a rampant goat.