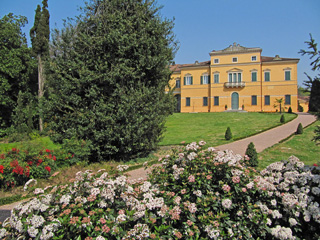 The Villa Fogazzaro-Roi, now known as "Colbachini", is in Montegalda. In Fogazzaro's novel Piccolo mondo moderno (The Man of the World) it is the residence of Don Giuseppe Flores, Piero Maironi and the Marchessa Nene Scremin's confessor. The villa dates back to the seventeenth century and belonged to Giovanni Antonio Fogazzaro, the novelist's grandfather. The famous architect and patriot Antonio Caregaro Negrin was commissioned to renovate and redesign the building in 1846 and under the watchful eye of Don Giuseppe Fogazzaro, the writer's uncle (a botany scholar), he designed the lake, “that yellowish, microbe-breeding, restless pond” the English Garden and the Italian Garden, described in Piccolo mondo moderno as follows:

[…] yellow-tinged clouds […] shone upon the damp steps of the villa, where Don Giuseppe was standing with a sad smile upon his face, and calling Maironi's attention to the picture presented by the plain, that faded away on one side towards the bluish, cone-shaped Euganeian Hills, on the other towards the thin wall of the Berici; and he was also telling him of the garden he had planned, designed and created upon this uncultivated plain and this wild hillside [...]

The main body of the villa is divided into three sections: the central section is on three floors while the wings extend outwards on only two floors. Regular ashlar work covers the ground floor and the corners and the windows are decorated with triangular pediments, while the central balcony with stone balustrade has an architrave, three-mullioned window. The cymatium or crown moulding is decorated in the centre with a coat of arms and cornucopia. The small chapel dates back to the fifteenth century. Today the villa houses the Museo Veneto delle Campane (The Veneto Bell Museum) which brings together historical examples, curiosities and traditional working techniques which can be seen in the reconstruction of a static casting foundry.