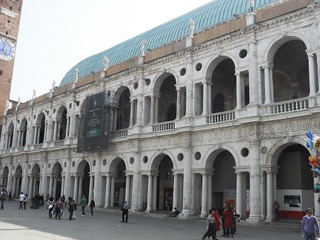 Basilica Palladiana, Vicenza
Start in Piazzetta delle Poste; leaving the square heading the south, the dome of the Cathedral can be seen on your left; cross Corso Palladio and continue on into Corso Fogazzaro; just before the end, at the church (Chiesa dei Carmini) turn right towards the bridge (Ponte Novo).
Cross the bridge and turn left on to Viale Bacchiglione; after 300m turn right into Via Volta and shortly after left into Via Gallilei; continue as far as Via Pagliarino and then turn left, crossing over Viale d'Alviano at the traffic lights into Via Lamarmora; go straight on at the crossroads with Via S. Martino turning right at the crossroads by the army barracks into Via Castelfidardo.
After 200m turn left into Via Medici; go straight on at the crossroads with Via Mentana into Via Curtatone; straight on at the junction with Viale dal Verme and continue into Via Dei Laghi; straight on until Via Bartolomeo da Breganze then turn left; the road then zig zags; at the small roundabout at the end join the bike-pedestrian path and leave at Via S. Antonino; turn right into Strada della Cresolella keeping the bike-pedestrian path to your right. The path will bring you to the Polegge road which is open to traffic; cross over and climb up the embankment; keep to the left orographic side, that is the right bank towards the river source; at the bridge in Cresole go straight across the road and follow the same embankment, at the bridge in Vivaro cross the road and turn right and after 100m turn left onto the road which leads to the church; go past the small restaurant on your left and keep going until the crossroads (a bike-pedestrian path is currently planned and when completed you will just need to cross over, follow it as far as the Villa and then cross back over to the left), for the moment stay on the left; follow the road keeping to the left and taking care as it can be very busy, turn left at the roundabout and stay on the main road until Bagarella mill – the start of the conservation area Bosco di Dueville. Follow the dirt track until you reach a small bridge, turn right and at the next crossroads turn right again, go over the bridge on the Igna stream and follow the main road; cross over the new bypass at the well-signposted roundabout and continue on to the centre of Novoledo.
Go straight across the main road and join Via Capitello on the bike-pedestrian path to the side as far as the junction in the business park 150m before the roundabout, turn left and after another 150m turn right, cross the small car park diagonally towards the left and go straight into Via Ghellini. Opposite Villa Ghellini turn round and come back leaving the chemist's on the left, go under the arcade/portico for 50m and cross over on the right, right again and you are in front of Villa Verlato; turn left towards the church and at the crossroads at the end of the road turn right, after 200m turn left into Via del Cimitero; keeping the cemetery to your right go straight on as far as the embankment (roadworks have recently started here; for the moment you can walk the embankment but it will soon be closed; the so-called “Strada della Vacheta” should stay open and you will have to keep the cemetery to your left and follow the tarmacked road as far as the bridge – Ponte del Redentore – and then pick up the embankment as signposted); follow the little road on the left which goes up the embankment and after 20m turn sharp right, heading north on the embankment; at the bridge (Ponte del Redentore) cross over and keep to the embankment as far as Ponte di Molina; cross over and go straight on until you reach Marano. Important notice: detour at Villaverla
This stage ends at the bridge in Via Braglio.

When
All year round (along the paths between Leogra-Timonchio pay special attention during hunting season as there may be hunting hides in the vicinity)
Technical details
Easy, completely flat.
Terrain
Asphalt, from the start around the area of Dal Molin in the northern suburbs and from the end of the woods in Dueville as far as the beginning of the Timonchio in Villaverla
Dirt tracks, north of via Polesella-Bosco Dueville
Unpaved-grass tracks along the embankment of the Bacchiglione from Vicenza to Vivaro and the embankment along the Timonchio from Villaverla to Marano.
Time
Road crossings 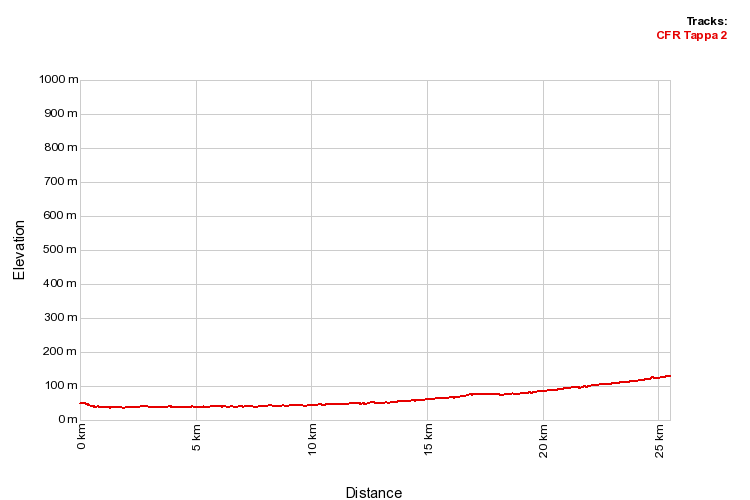 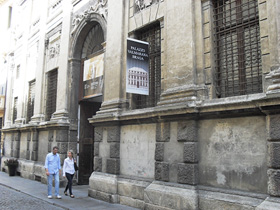 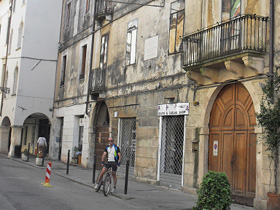 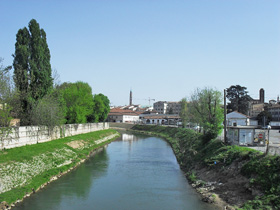 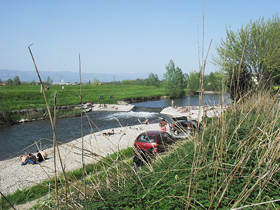 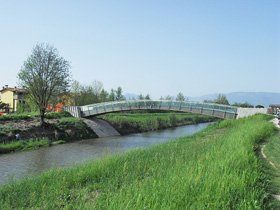 The bridge in Cresole,
Caldogno 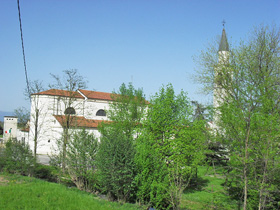 The church in Vivaro,
Dueville 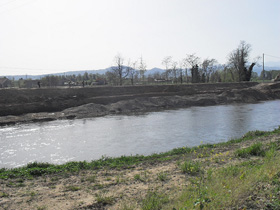 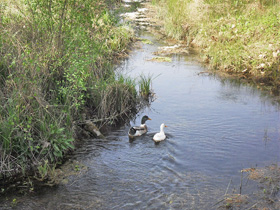 The wood in Dueville,
resurgence waters 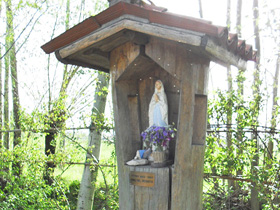 Shrine in Via Boschi,
Novoledo