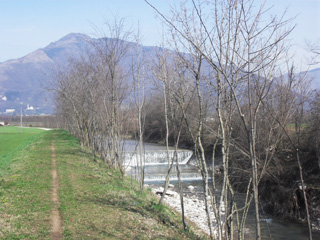 Start in Marano where the road forks in Via Braglio, bear left and on the flyover turn right towards the embankment along the Timonchio, at the junction with Via Pasubio, a dual carriageway, turn left over the bridge and immediately right back onto the embankment, at the junction with the main road SP122 continue along the embankment on the same side and after 300m, at the junction with Via Prole turn right; continue straight on until Via Venezia and turn left, after 200m turn right onto Via Milano and after another 200m turn left and then right shortly after onto the dirt track; go on approximately 1km as far as the tarmacked road Via Nazario Sauro, continue as far as the crossroads with Via Stazione, turn left over the level crossing and 50m later turn right into Via Molette; after 400m take a sharp left into a side road and continue until you come to Via Capitello, which is normally very busy; go straight on following the dirt track and just past a farm on the right, turn left; after 50m be careful as a sharp bend to the right brings you onto the new bike-pedestrian path which crosses over the new road below and leads into contrà Vanzi; not far ahead is the crossroads with Via Machiavelli, turn left by an old farmhouse; after 100m look carefully as the entrance to the bike-pedestrian path on the right is half-hidden; go through four crossroads in the Schio business park and at Campo Romano cross over Via Dell'Industria just before the traffic lights; be very careful here as there are no signs on the road and it is a highly dangerous crossing; continue along the road and after 30m turn right onto Via Campo Romano; continue until the new hospital and turn left into Via Campagna which initially runs parallel to the bike-pedestrian path leading to the hospital; straight on through the fields along the dirt track as far as the Chiappin farm; turn left into Via dei Prati where the dirt track eventually becomes tarmacked; continue for more than 1km and just past the new cemetery on the right, turn right at the crossroads into Via Prasamarin; after 400m leave the main road and turn right at the wooden bridge, continue through the underpass and go on past the schools; keep to the right and go up towards the bike-pedestrian path which leads to the playing fields; continue along the narrow cycle path until the pedestrian roundabout; look to your left and you will see an entrance in the walls surrounding Villa Rossi; go through and there is a wide-stepped dirt track which climbs to come out on Via Alessandro Rossi; continue right past Villa Rossi, downhill into Via Lesina and straight on at the crossroads into Via San Carlo, past the little church of the same name; after a short climb the road drops down and watch out for the turning on the left, 500m ahead, down into Via S. Vito; continue down, going straight on through all the crossroads in the area of Grumello di Piovene Rocchette; there is a big roundabout at the end, stay on the pavement to the left and go straight on; after 300m you will see Centro Expert on your right on the other side of the road; turn left here and after 100m turn right into Via del Monte and then straight ahead onto Via Libertà; continue straight on uphill against the flow of traffic and when you reach the little square turn left to climb up into Via delle Fonti; at the end of this short stretch you will reach the car park for the Birreria Vecchia; keeping this to your left continue straight on up the paved steps through the renovated houses as far as the big fountain; cross over Via dell'Angelo into Via Castel Manduca and continue downhill; go under a portico and into an open space; turn left into Via Preare, a dirt track which climbs first and then drops; at the junction with the main road keep to the pavement on the left and not long after cross over the route for the bike-pedestrian path and then cross over again; follow the route of the old railway line, shown on a noticeboard, which descends immediately into a tunnel; stay on the path for 5 km until you reach the old Velo d'Astico station, which is now the Gran Passo Restaurant.

Starting point
Marano Vicentino at the bridge in Via Braglio
Parking
There is a small car park before the embankment
Parking in the centre of town, 1 km away
Motorway
Exit Thiene follow signs for Marano 2.5 km
Main roads
SP1 from Thiene
SP46 from Schio-Malo
Once in the town centre head south to Via Braglio
When
All year round. Be careful at road crossings and stretches along main roads
Technical details
Easy. Gentle climb as far as Piovene Rocchette
The hardest climb begins just outside town: Via dell'Ospizio (cyclists will have to get off and walk)
Gentle descent as far as the “Patronato”
Another climb up to the former lime works
Some gentle gradients along the old railway line
Terrain
Unpaved-grass tracks along the embankment from Marano-Timonchio Farm
Asphalt from Timonchio to Garziere and the crossing at Piovene
Paving stones Via Ospizio Piovene
Dirt track Garziere-Piovene and the old railway line Piovene-Velo
Time
Road crossings 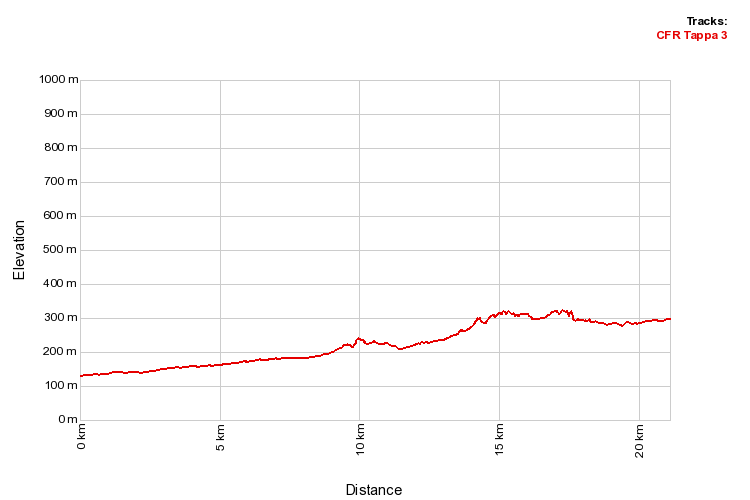 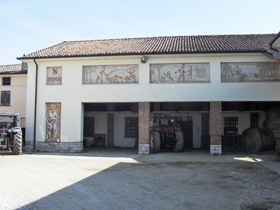 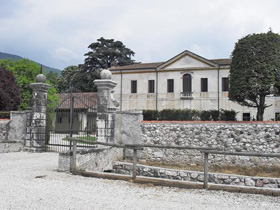 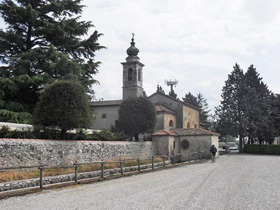 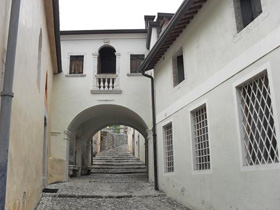 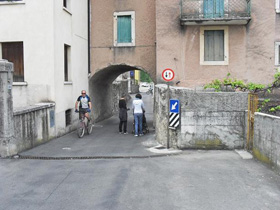 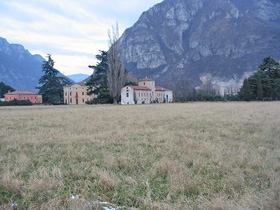